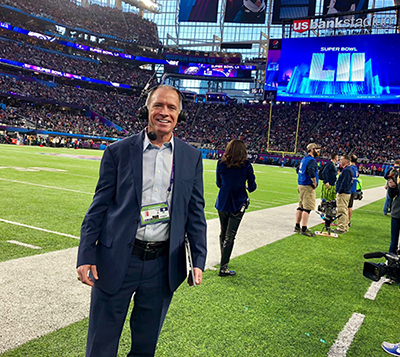 Mike Ryan, PT, ATC is an Athletic Trainer (AT)/Physical Therapist who works as a Sports Medicine Analyst on the sidelines for NBC Sports’ Sunday Night Football.

I work on the sideline as a Sports Medicine Analyst for NBC Sports’ Sunday Night Football games. During the week, I research injury histories for both Sunday Night Football teams. During the game, I work with our broadcast team to provide them with accurate in-game injury updates and simplified terminology to describe the injuries for our viewers.

How long have you been practicing as an AT?

I became a BOC Certified Athletic Trainer in January of 1985 between semesters during my senior year in the athletic training program at Central Connecticut State University. I was returning to the New York Giants as a summer intern in 1985 and didn’t want my certification exam to interfere with my childhood career plan of becoming an National Football League (NFL) AT. I spent 26 full seasons in the NFL and served as Assistant Athletic Trainer/Physical Therapist for the New York Giants for 6 seasons. In 1994, I became the Head Athletic Trainer/Physical Therapist of the Jacksonville Jaguars. My staff and I won the Ed Block Courage Award’s NFL Athletic Training Staff of the Year in 2003.

During the week, my daily routine starts with a 4:30am workout followed by private physical therapy sessions with high level, professional athletes. I then research NFL injuries, wellness consulting projects and sports medicine writing/blogging.

In addition, I record 1 to 3 sports medicine videos for various social media platforms during the week and/or on game day. Practicing broadcasting drills, mock interviews and on-camera reps is part of my daily routine. 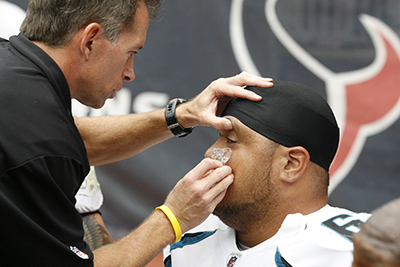 I enjoy continuing to learn how to best manage sports injuries and the best ways to educate others about those injuries in simple-to-understand terms. Sports medicine isn’t a job for me, it’s my passion. I feel so fortunate to be able to blend my passion and skillsets into a career.

Read and research the leaders in our industry. We can become old school in this profession in as little as 3 years if we stop learning. Don’t do that to yourself, your patients or your profession!

Prepare for a CE Audit with These Important Tips

The Profession and Parenting: Strategies for Making it Work