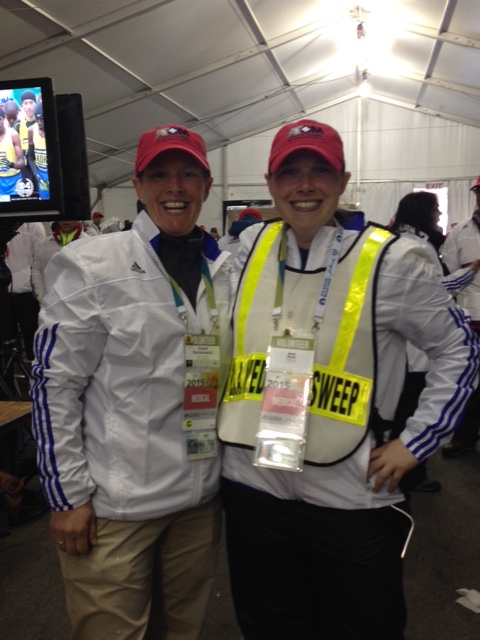 Just days after the events of the 117th Boston Marathon in 2013, President Obama said, “this time next year, on the third Monday in April, the world will return to this great American city to run harder than ever, and to cheer even louder, for the 118th Boston Marathon.  Bet on it” (Los Angeles Times, 2013).  On April 21, 2014, for the 118th time, Boston did just that.  We ran again.  Now, 2 years later, we continue to run.

On Patriots’ Day, April 20, 2015, approximately 30,000 runners ran in the 119th Boston Marathon.  Although the weather was cold, raw and rainy, the spirit and energy of the race was just as strong as ever.  Thousands of volunteers gathered from Hopkinton to Copley Square to cheer for the wet and cold runners, and 1,600 medical volunteers, from all realms of healthcare, provided care for those who were injured or ill.  At the beginning of the day, the medical volunteers knew hypothermia was going to be an issue for our runners, but BAA Medical Coordinator Chris Troyanos, ATC, and the Marathon Leadership Team were prepared.  Once again the Boston Marathon medical staff stepped up to the challenge and cared for the patients in front of them.

The finish line of the Boston Marathon is a relatively large area that stretches about 8-10 street blocks, which includes Boston Common.  Medical personnel and wheelchairs were placed throughout the entire finish line area in order to assist any runner within the secured sweep/finish area. These medical volunteers were charged with identifying runners who were in need of medical attention and transport them to their assigned medical tent.  From the corner of Boylston and Berkeley streets, the day started off relatively slowly for both the runner flow and the rain.  However, by mid-afternoon the showers became steady, the wind began to swirl through the high rises and the runners began to file in by the thousands.  There were very few runners who were not shivering, and hypothermia quickly became a concern for both the runners and the medical volunteers.

From the beginning, Chris Troyanos made it clear all volunteers needed to take care of themselves in order to take care of others.  The Finish Line Sweep Team volunteers came prepared with layers of clothing, ponchos, food and water.  As the day progressed, Sweep Team volunteers rotated their shifts so they could go inside a medical tent or building to re-warm and dry off, as they were just as at risk for hypothermia as the runners.  Standing in the rain and wind for several hours is not the most pleasurable experience; however, the kind gestures, words of gratitude and thanks from the runners and their families overrode any uncomfortable moments.  Even during the worst gusts of wind and downpours of rain, the runners continued to tell the medical volunteers, “Thank you for being here.”  Countless times, we heard, “Thank you for volunteering.”  These simple words kept our Sweep Teams focused on doing their jobs, poised to treat the person in front of them and to not become frustrated or discouraged by the forces of Mother Nature.

As we look forward to the Boston Marathon in the years to come, let us remember and honor what this race and the city of Boston have given our country and our profession.

Dick Hoyt, who was the Grand Marshal of the 2015 Boston Marathon and who pushed his son in 32 Boston Marathons, stated that the bombing in 2013 “Doesn’t stop us” (Los Angeles Times, 2013).  President Obama added that Dick Hoyt’s statement is “What you’ve taught us, Boston … to push on. To persevere ... not grow weary … not get faint.  Even when it hurts.  Even when our heart aches.  We summon the strength that maybe we didn’t even know we had, and we carry on. We finish the race” (Los Angeles Times, 2013).

Let us embrace the story of Maickel Melamed, a man with muscular dystrophy, who completed this year’s Marathon in 20 hours while enduring the rain, wind and cold (WCVB, 2015).  It is for runners like Maickel who keep us motivated and passionate about our work as Boston Marathon volunteers.  The weather conditions this year were far from optimal, but as a community, nation and profession a little rain does not stop us and will not stop us.

To all of the Athletic Trainers and athletic training students, thank you for doing a phenomenal job and for all of your hard work and efforts.  See you all next year when we will run again. Rain or shine. #BostonStrong

WCVB. (2015). Runner who finished the Boston Marathon 20 hours after start ‘did it for Boston’: Maickel Melamed born with muscular dystrophy. Retrieved from: http://www.wcvb.com/news/runner-with-muscular-dystrophy-vows-to-finish-boston-marathon/32476986.