Efficacy of Mouth Guards in Sports

Mouth guards have been a frequent topic of discussion in sports regarding their efficacy and ability to prevent various oral and facial injuries. Furthermore, the discussion is ongoing and further evidence is emerging, allowing us to fully understand whether mouth guards play a direct or indirect role in the likelihood of a concussion following a trauma to the head and face.

By the start of World War II, most professional boxers had begun using a commercially sold mouth guard for safety. Sports mouth guards were first recommended by the American Dentistry Association in 1950.1 When the first mouth guards were initially developed, the goal was to prevent and reduce possible oral injuries and damage to surrounding structures. Currently, the primary objective of a mouth guard is to absorb, dissipate and distribute forces away from the impact zone.1 Recommendations as to which type of mouth guard should be used often lean towards self-adapted, custom made mouth guards, which have shown to reduce the incidence of dental injuries.1

While mouth guards are recommended and indicated in contact sports, some players opt out of using them due to complaints of breathing difficulties, discomfort and difficulty verbally communicating during exertion. Francis and Brasher tested various types of mouth guards and measured the effects on an individual’s oxygen intake during maximal exertion.2 Interestingly, while athletes frequently complain about breathing difficulties, the mouth guard did not decrease exercise economy or decrease oxygen uptake.2

The question still remains: Can mouth guards prevent or at least limit the amount of force that is transmitted to the brain following trauma to the head? 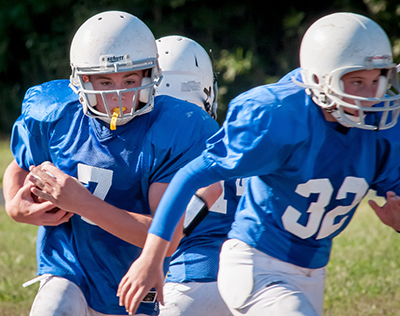 A study done in 2006 by Mihalik, et al., evaluated 180 athletes who experienced a concussion. First they grouped each athlete into 1 of 2 groups: those who wore a mouth guard at the time of their injury and those who did not. Researchers then compared each athlete’s neurocognitive functioning with their baseline ImPACT® test and found that within the mouth guard group, there were no significant differences in neurocognitive deficits when compared to the non-mouth guard group.3 This study, among many others, suggests that mouth guards may not contribute to the prevention of concussive trauma following a hit to the head.3

Another study done in 2005 by Takeda, et al., attempted to put the efficacy of mouth guards to the test. They created a make-shift skull, mandible and maxilla, fitted it with a mouth guard, and attached an accelerometer just below the mandibular service. The goal of this study was to determine how much acceleration was needed to send a concussive force from the mandible into the inferior and lateral aspects of the skull. The results of the study found that the mouth guard was able to dissipate and distribute the force applied to the mandible, yielding a lower percentage of force that reached the right and left temporal mandibular joints.4 While this study shows promise, the evidence still remains inconclusive from a practical standpoint.

Athletic Trainers should continue to encourage athletes to wear a mouth guard to prevent oral and dental injuries in contact sports. But one thing is clear: further clinical trials are needed to determine the true efficacy of whether mouth guards can alleviate the forces that contribute to a concussion.