The moment your athlete goes down during a training session or game holding their ankle/foot, Athletic Trainers (ATs) brace for the worst and hope for the best. By the time we can run out onto the field or court to quickly and thoroughly evaluate the extent of injury, we begin to think ahead and plan the rehab that will be necessary to return the athlete to full play.

An estimated 2 million acute ankle sprains occur each year in the United States alone, resulting in an annual aggregate healthcare cost of $2 billion. An ankle sprain is the most common injury in athletic populations and accounts for up to 30 percent of sports injuries (Waterman et al., 2010). 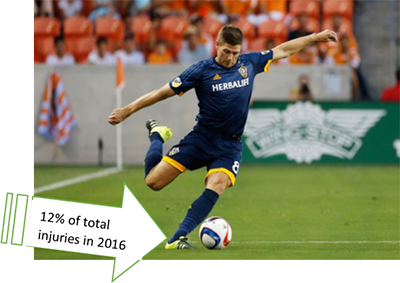 In the general population, nearly half of all ankle sprains (49.3 percent) occur during athletic activity. The sport most commonly associated with ankle sprain is basketball, accounting for 20.3 percent of all sprains, followed by football (9.3 percent) and soccer (7.9 percent) (Waterman et al., 2010). Research has found that the peak incidence rate of ankle sprains occurs in individuals between 10 and 19 years of age, and that this age group experiences a 6 to 9-fold greater risk of ankle sprain than those in the 55 to 59-year-old age group (Waterman et al., 2010).

Recent research has shown that inversion ankle sprains are the most common injuries in soccer (Mohammadi, 2007). This type of ankle injury primarily occurs during plantar flexion and inversion of the foot. If this type of injury is not dealt with appropriately during and after the rehab process, these athletes are put at a higher risk of reinjuring the same ankle. Once the initial stages of inflammation subside and the athlete can ambulate without pain, proprioceptive training becomes a critical part of the rehab process and even more important in preventing potential ankle injuries in the future.

The evertor muscles have been suggested to play an important role in preventing ligamentous injuries, as research has found that evertor muscle weakness is a component of recurrent ankle sprain. Evertor muscle weakness in athletes who have had previous injury could be the result of an interruption of the muscle’s nerve supply or the result of selective inhibition of the invertor’s ability to start moving in the direction of the initial injury (Mohammadi, 2007). It has been postulated that eccentric contraction of these muscles provide dynamic support to the lateral ligaments of the ankle and potentially resists ankle sprains. With that in mind, strength training of the evertor muscles, both concentrically and eccentrically, needs to be a part of both rehabbing and preventing ankle sprains. Without any intervention, the increased re-injury risk gradually declines over a 1 to 2-year period until the baseline risk level is achieved again (Verhagen & Bay, 2010).

Taping or using some sort of orthotic device has also been used to help prevent ankle sprains. Recent research has found that orthoses reduced the incidence of ankle sprains in previously sprained athletes (Mohammadi, 2007). Ankle taping/orthoses protect the ankle by attempting to prevent inversion movements and keeping the ankle in the proper anatomical position during impact. Additional research has found taping of the ankle is the most commonly used preventative measure and a 2 to 4-fold lower ankle sprain rate was found for those athletes who taped their ankles when compared with those with no preventative measures (Verhagen & Bay, 2010).

Ankle sprain injuries can result in considerable time lost to injury and long term disability in up to 60 percent of patients (Waterman et al., 2010). The tendency for ankle sprains to recur or experience functional instability is attributable to a proprioceptive deficit caused by partial deafferentation of articular mechanoreceptors in the joint capsule and ligaments surrounding the ankle. In fact, athletes with a history of recurrent ankle sprains have a decreased sense of ankle position, which can potentially result in a slow onset of activation of muscles across the ankle joint especially evertors, and thus a failure to correct any excessive ankle positions (Mohammadi, 2007).

It has been suggested inappropriate positioning of the ankle joint before ground contact during walking may have important implications for ankle joint stability. Recent research has found that during the stance phase of gait, subjects with chronic ankle instability exhibited altered kinetics, which can be suggestive a lateral shift of body weight. Subjects with ankle instability have also been found to have a more inverted position of the ankle joint before and immediately after heel strike compared with a control group (Delahunt et al., 2006).

Subjects with functional instability have been shown to exhibit a more inverted position of the rear foot during the initial contact and loading phases and have a dorsiflexion deficit when compared to control subjects. Other research has suggested an increased plantar flexion touch down upon landing from a jump could precipitate the onset of an ankle joint sprain (O’ Driscoll et al., 2011).

The purpose of proprioceptive rehabilitation is to retrain altered afferent pathways to enhance the sensation of joint movement, which comes into action at 3 distinct levels of motor activation within the central nervous system (CNS). Reflexes at the spinal level mediate movement patterns that are received from higher levels of the nervous system, which provides reflex for joint stabilization during conditions of excessive stress.

The brainstem receives information from the joint mechanoreceptors, vestibular system and visual input from the eyes to maintain posture and balance of the body. The highest level of the CNS obtains cognitive awareness of body position and movement in which motor commands are initiated for voluntary movements. These movements are repeated and stored as central commands to be performed without continuous reference to consciousness. To stimulate reflex joint stabilization, activities must focus on sudden changes in joint positioning that necessitate reflex neuromuscular control (Ergen & Ulker, 2008).

A review of research involving balance board/disc training, strength training and proprioceptive training shows proprioceptive training is the most effective part of these programs. The neuromuscular training targets the underlying impairment by re-establishing and strengthening the ligaments, muscles and protective reflexes of the ankle (Verhagen & Bay, 2010). Following an ankle injury, it is incredibly important to focus on the dynamic stability of the ankle joint to ensure the athlete can react quickly to sudden inversion ankle motions, thus preventing sprains of the lateral ligament complex of the ankle.

Delahunt, E., Monaghan, K., & Caulfield, B. (2006). Altered neuromuscular control and ankle joint kinematics during walking in subjects with functional instability of the ankle joint. The American Journal of Sports Medicine, 34(12), 1970-1976.

Evidence to Practice: Engaging the AT Research Agenda as an Educator