How much water is enough?

How much water should athletes ingest during training or competition? That is a common question Athletic Trainers (ATs) are asked on a daily basis. Fluid replacement guidelines intended for the general population are typically insufficient for an athletic population. As a result, care must be taken to deliver advice that is not only evidence-based but realistically implemented. No standardized recommendation or volume of water will be accurate since fluid replacement demands will vary between individuals based on sweat rate, amount of fluid lost during sport and many other physiological variables influencing drinking behavior. This means metrics suggest drinking 1 ounce for every pound or kilogram of body weight are largely inaccurate and depending on activity level, could potentially be harmful. 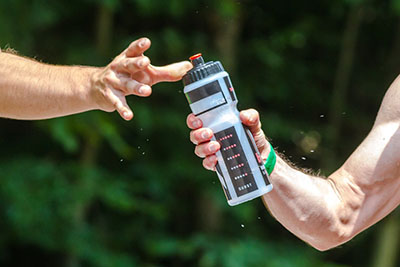 During exercise, athletes should only drink when they are thirsty and not attempt to ingest as much fluid as they can tolerate.1 The primary reason behind this is safety and an effort to prevent exercise-associated hyponatremia (EAH). Many beverages available to athletes are largely hypotonic in composition, which if ingested in large amounts, can dilute plasma sodium concentrations to dangerously low levels causing EAH or potentially death.1 This includes sports drinks, which are often chosen over water with the intended goal of replacing electrolytes lost through sweat. However, the electrolyte content found in many commercially available sports drinks is inadequate for electrolyte supplementation. The volume an athlete would need to ingest in order to replace their average electrolyte losses would far exceed their fluid losses, resulting in overdrinking and EAH.1,2,3

ATs can play a pivotal role in preventing EAH. In addition to recommending that athletes drink-to-thirst during activity, a red flag for EAH is maintaining or gaining weight during exercise as a result of excessive fluid intake.1 Even though changes in body-weight are not always a reliable measure of overall fluid balance,4 it offers a practical approach for ATs to monitor athletes on a day-to-day basis, especially in situations where fluid ingestion may exceed an athlete’s total fluid losses. Athletes should not fear weight loss during exercise as it is normal and mild to moderate dehydration while drinking-to-thirst does not pose a threat to healthy individuals.1 However, following activity, slightly different strategies need to be employed for fluid replacement.

Thirst is a poor indicator of hydration status in humans. Research5 has demonstrated humans only replace up to 70% of fluid losses if we drink until the cessation of thirst. While this is acceptable behavior during exercise, it can pose problems with maintenance of plasma volume and overall recovery following activity. Athletes should continue to monitor their body weight and continue to drink following activity but in amounts that do not cause them to gain weight beyond what they have lost, as the risk to develop EAH is still present.1 Additionally, athletes should aim to return to their normal weight or prior to their next training session or game. In addition to fluids, replacing sodium post-exercise can also aid in the rehydration process, which will be covered in future blog posts. Please see the below sources for additional material on this topic.