Muscle Cramping - Is Neuromuscular Control or Hydration Status to Blame?

We all know the drill. Your athletes have been playing hard: sprinting to capture stray balls, out hustling the other team and staying focused as the game nears the final minutes. Then it happens. One of your players goes down and doesn’t get back up. You quickly stand to see what’s wrong. They’re grabbing their calf in pain; you have an immediate suspicion. They’re cramping.

What is the most effective way to treat your athlete? And furthermore, how do you decrease the likelihood of it happening again?

While the experience of muscle cramping in sports is nearly universal, a clear understanding of the etiology is surprisingly lacking. There are many hypotheses, the most well-known of which-namely that dehydration and electrolyte depletion are to blame, is not well supported by research (Schwellnus et al., 2010). In fact, Schwellnus, Nicol, Laubscher, and Noakes (2004) found no relationship between serum electrolyte concentrations and hydration status and the occurrence of EAMC in long distance runners participating in a 56-kilometer race. Furthermore, researchers have documented EAMC occurring in athletes with serum sodium and potassium levels well within the normal rage (Murray et al., 2016). 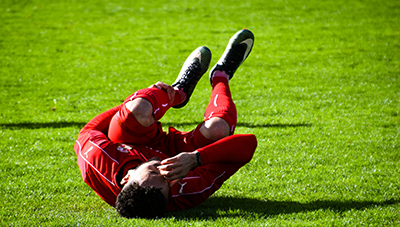 If dehydration and electrolyte imbalances are not the cause of muscle cramping, what is? Muscle fatigue, leading to neuromuscular fatigue, and eventual loss of neuromuscular control has been investigated by researchers as a cause of EAMC since the late 1990’s (Schwellnus et al., 2010). According to the muscle fatigue hypothesis, “fatigue increases the muscle spindle afferent activity and decreases the Golgi tendon organ afferent activity, which may result in increased alpha motor neuron activity” (Schwellnus et al., 2010). In other words, the balance between the excitatory effects of muscle spindles and the inhibitory effects of Golgi tendon organs is lost, leading to uncontrolled contraction of the muscle fibers.

Two specific risk factors have been identified for the development of EAMC: a previous history of EAMC, and prolonged exercise at a greater relative intensity than normal training (Schwellnus et al., 2010). In addition, exercising in hot and humid environmental conditions has been linked to an increased risk for cramping (Schwellnus et al., 2008). Muscle cramping occurs incrementally. Skeletal muscle fatigue often experienced due to a lack of fitness acts as the first step in the chain reaction, followed by muscle twitching, spasmodic spontaneous contractions and complete muscle cramps if the exercise is not discontinued (Schwellnus et al., 2008).

Your best bet to decrease the occurrence of cramping is to adopt strategies which delay exercise-induced muscle fatigue, such as utilizing appropriate training and nutrition regimens (Nelson et al., 2016).

Follow these 5 recommendations to prevent the occurrence of EAMC

Follow these 5 steps to manage an athlete experiencing EAMC:

Kristen Andrews is the Sports Dietitian for the US Men’s National team and the Los Angeles Galaxy, where she works with top national and international professional soccer players, as well as up-an-coming young stars, helping them to maximize their performance by being well-rounded, purposeful eaters. She is a Registered Dietitian Nutritionist, has a bachelor’s degree in dietetics from the University of Arkansas, a master’s degree in nutritional science from California State University Long Beach and is a Certified Strength and Conditioning Specialist.