Ice hockey is a sport often defined not only by its fast-paced action, but also by the injuries that result from contact between players or being hit into the boards. Specific injuries and their occurrence vary between men’s and women’s hockey, youth hockey compared to adult and professional compared to amateur levels of play. However, there are common injuries that routinely occur at all levels of play.

One of the most frequently encountered injuries in ice hockey is groin strains. Numerous pre-disposing factors for this condition have been suggested in the literature. However, there seems to be more widespread agreement that they are a result of imbalances between abduction and adduction muscle strength at the hip, in addition to having a prior history of adductor injury.1 Skating in hockey is unique and unlike any other athletic movement in sports. As a result, the demands placed on the pelvis and hip are often difficult to manage once injury has occurred. Adductor strength and control are needed in order to help support the pelvis through the transition of one leg to the other while skating. During a stride, players will briefly load both hips simultaneously as they are transitioning from one leg to the other for their next stride. Loss of pelvic control through the adductor will result in injury during this transitional movement.

In a contact sport such as ice hockey, knee injuries are bound to happen. However, it is rare that these injuries result from non-contact activity as seen in other sports like basketball or soccer. If a ligament is involved, it is typically the result of someone falling on an opponent’s leg, sustaining knee-on-knee contact or a player’s skate being caught on the ice as they are hit in their upper-body. The exception to these occurrences are goaltenders who can experience medical collateral ligament (MCL) and meniscus injuries due to the unique nature of their position and the commonly used butterfly style of goaltending, which puts additional stress on those structures. 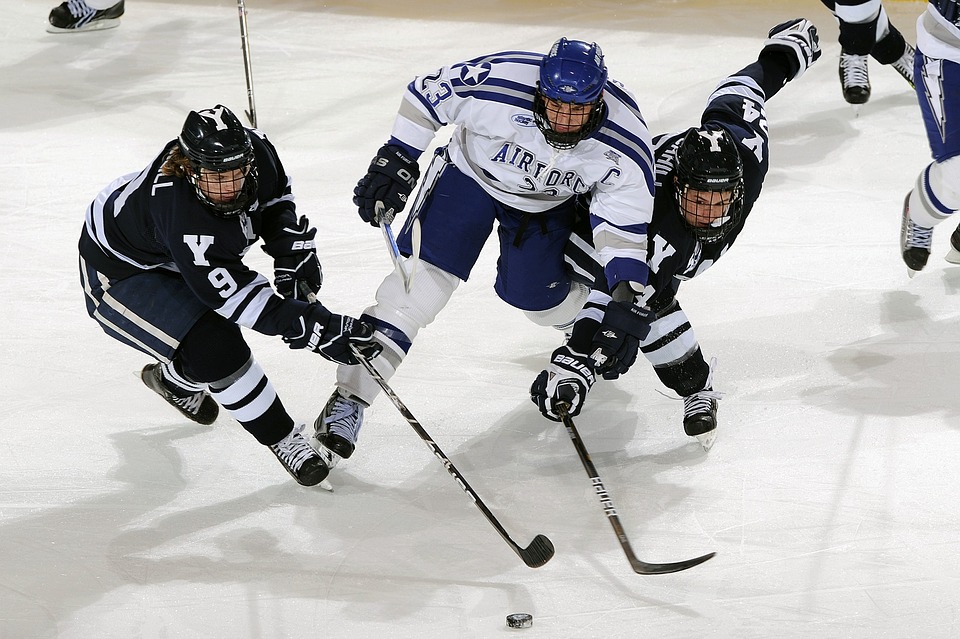 Similar to other contact sports, injury to the Acromioclavicular joint or AC joint is a common occurrence in ice hockey, and tends to happen more when players are old enough to begin body-checking.2 What is deemed a legal body-check at most levels of play subsequently places the AC joint in a position to absorb a significant amount of force with shoulder to shoulder contact. This is especially true when a player is hit into the boards with their arm positioned across the body. For hits that are more straight-on, the clavicle is placed at a higher risk with the possibility of disrupting its role in the AC joint should a fracture occur.

Even though leagues at all levels are taking steps to remove intentional head-contact from the game, the risk of concussion is still present. Interestingly, according to NCAA injury surveillance data for women’s ice hockey, concussions account for up to 22% of injury in games and 13% of injuries sustained in practice.3 This is much higher than what is reported for men at the same level.4 However, the inverse is true at the youth levels where the occurrence of concussion in boys’ high school hockey is only second to high school football.5 This widespread occurrence supports the continued need for Athletic Trainers to be vigilant in their recognition and appropriate treatment of athletes who sustain a concussion.

In a sport where a frozen rubber disk routinely travels at high rates of speed, it is not surprising that contusions are a common injury, particularly to the lower extremity, foot and ankle when the puck is shot into a crowd of people. Additionally, upper extremity contusions are often the result of players getting cross-checked or slashed by another player’s stick. For those who don’t watch hockey regularly, this behavior is supposed to be penalized, but far too often is not.